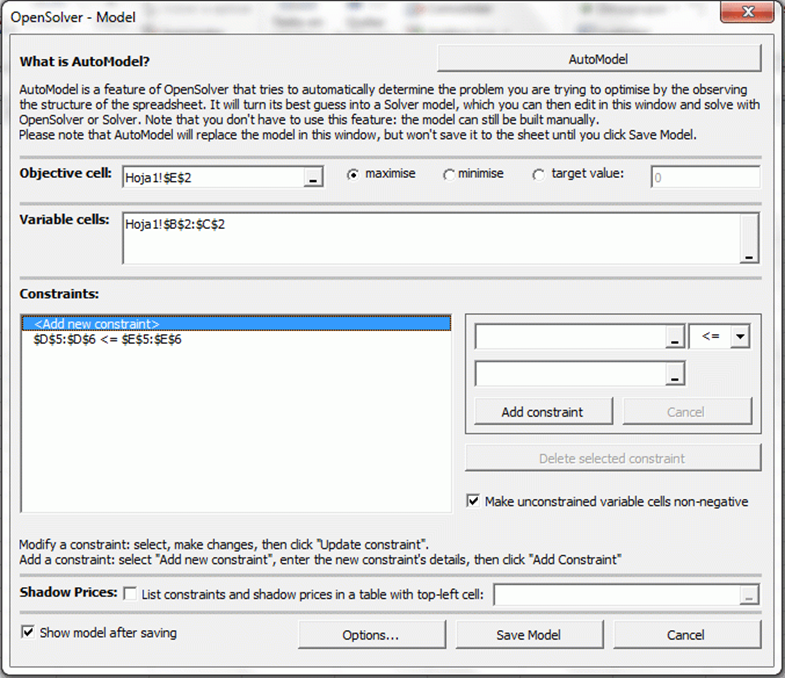 OpenSolver is a great Excel Add-in that solves optimization models. The following article will describe how to solve a Linear Programming model using this tool (first you must Download and install OpenSolver in Excel). For educational purposes we will consider a linear programming model with two decision variables and four constraints, nevertheless you can easily extend its application to larger problems.

We will then need to prepare an Excel spreadsheet that includes the model’s parameters and variables (this step is similar to loading a problem in Frontline’s Solver). You can see that cells B2 and C2 (yellow color) have been assigned as the decision variables and cell E2 corresponds to the objective function (blue cell), which is a formula that links the decision variables to their respective parameters. Finally cells D5 and D6 are formulas that represent the “left-hand side (LHS)” of the problem’s constraints (for example, cell D5 corresponds to B2*B5+C2*C5 or equivalently SUMPRODUCT(B2:C2;B5:C5)).

Once the previous step has been completed you must run OpenSolver, whose menu can be accessed from the “Data” tab in Excel. Then select “Model…” as shown below: 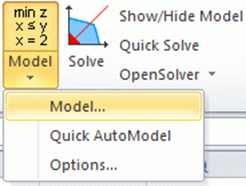 The interface for implementing the model is quite similar to the traditional Solver (Frontline) version. The objective cell is defined (E2) in maximization; next you must select the range of decision variables (as shown in the following image) and the constraints. If you try to replicate the structure of the example we are going over in this article, then it should look like this:

Then we select “Save Model” (the structure of the template will change and become different colors, one of the characteristics OpenSolver has that makes this Add-in such a intuitive tool for the user).

The program is run and gives us the optimal solution (

) and the optimal value

for the optimization problem:

The results achieved are consistent with those obtained in the graphical solution of the problem that we went over in the article “What does a Shadow Price of Zero mean in Linear Programming” as shown in the following image:

Below you can download the file that contains OpenSolver’s solution to this problem so that you can familiarize yourself with this Excel Add-in: OpenSolver Excel.

Linear Programming allows us to tackle various real life problems, some of which we have already gone over in previous articles, such as the Transportation Problem, the Product Mix Problem and the Diet Problem. In the following article we will analyze a different classic application known as the Production Inventory Problem.

This problem is essentially used for establishing a policy for production within a time period that satisfies certain demand requirements, respecting the manufacturing limits and at a minimal cost. These types of models can be extended to use with several products, however, for this example we will only consider one single product:

We define the following linear optimization model: (Given: there is an initial inventory of 50 units => I0=50).

Satisfy the demand requirements (known as the inventory balance constraint):

The following tutorial demonstrates how to implement this Linear Programming model using Solver in Excel:

The optimal solution is shown below with an optimal value of $43,450. One can see that a total of 780 units are produced between January and June, which together with the initial inventory of 50 units satisfies the monthly demand requirements.

Would you like to receive the Excel file with Solver’s solution to this problem? get free and immediate access to the file now: Production and Inventory

As we have discussed in previous articles, the Shadow Price of a constraint represents the rate of change of the optimal value as a result of a marginal change in the right-hand side of a constraint. “Marginal” is understood as a modification that does not change the geometry of the problem, that is to say, the new optimal solution can be found by solving the system of equations that led to the original active constraints (previously updating the parameter we are modifying). In this context the shadow price can be a value that is positive, negative or zero, in this article we will be referencing the latter.

The previous problem can be solved graphically using Geogebra, which generates a problem with infinite optimal solutions in the section of the straight line that connects vertexes B and C and can be generally described as: (X,Y)= λ(0.60)+(1- λ)(10.45) with λ in the interval between [0,1]. The optimal value is therefore V(P)=1,200.

We evaluate this result in the following formula in order to calculate the Shadow Price value, obtaining the following:

Therefore the shadow price of constraint 1 (5X+2Y<=140) is zero, which indicates that if the value of the parameter representing its right-hand side increases or decreases (currently b1=140) in the interval between [120,200] the optimal value of the problem will not be affected. The above is consistent with what was obtained using the confidentiality analysis of constraints by Solver in Excel:

In general a Shadow Price equaling zero means that a change in the parameter representing the right-hand side of such constraint (in an interval that maintains the geometry of the problem) does not have an impact on the optimal value of the problem. Nevertheless, there are special cases like the Linear Programming problems that support infinite solutions (like the one described in this article) where a constraint with a shadow price of zero can be active in one of the optimal vertexes (the most common case is a constraint with a shadow price of zero that is not active in the optimal).

When applying the Simplex Method to calculate the minimum coefficient or feasibility condition, if there is a tie for the minimum ratio or minimum coefficient it can be broken arbitrarily. In this instance, at least one basic variable will become zero in the following iteration, confirming that in this instance the new solution is degenerate. The practical implication of this condition indicates that the model has at least one redundant constraint.

Let’s consider the following Linear Programming model which we will solve using the Simplex Method and which we will also represent graphically with Geogebra:

We put the above problem in its minimized standard form, adding

, as slack variables for constraints 1 and 2, respectively.

To facilitate the fast convergence of the algorithm we select

as the entering variable. Next we calculate the feasibility criteria (smallest coefficient):

(if a tie exists we arbitrarily select variable

as the variable that leaves the basis. Then we update the tableau:

enters the basis. The feasibility criteria determines that:

leaves the basis. A new iteration is made:

The degenerate optimal solution is reached for the linear problem. Note that

. As this is a two-dimensional problem, the solution is overdetermined and one of the constraints is redundant just like the following graph confirms:

In practice knowing that some resources (like those associated with a constraint) are superfluous can be useful during the implementation of a solution. From a theoretical point of view, the degeneration has two implications: it produces the cycling or circling phenomenon (it’s possible that the Simplex Method repeats a series of iterations without ever improving the value of the objective function and the calculations are interminable, as can be observed in the previous example); the second theoretical aspect arises when iterations 1 and 2 are examined. Although they differ in the classification of basic and nonbasic variables, both produce identical values for all variables and for the objective value

The Vogel Approximation Method is an improved version of the Minimum Cell Cost Method and the Northwest Corner Method that in general produces better initial basic feasible solution, which are understood as basic feasible solutions that report a smaller value in the objective (minimization) function of a balanced Transportation Problem (sum of the supply = sum of the demand).

Step 2: Identify the row or column with the greatest penalty cost. Break the ties arbitrarily (if there are any). Allocate as much as possible to the variable with the lowest unit cost in the selected row or column. Adjust the supply and demand and cross out the row or column that is already satisfied. If a row and column are satisfied simultaneously, only cross out one of the two and allocate a supply or demand of zero to the one that remains.

In any other case, continue with Step 1.

Let’s reconsider a balanced transportation problem that has 3 supply sources (silos) and 4 demand sources (mills). The numerical values in the upper right-hand corner of each box, from now on , represent the per unit transportation cost from silo i to mill j. For example,

is the per unit transportation cost from silo 1 to mill 1.

Based on what we previously described, the first step consists of calculating the penalty cost for each row and column of the tableau that represents the previous transportation problem. For example, in row 1 the lowest cost is $2 and the next lowest unit cost is $10. Thus the penalty cost for that row is $8 ($10-$2). The same calculation is replicated for each row and column of the tableau, which is trivial, and gets the following results (the penalty costs of the respective rows and columns have been marked in orange for clarity):

has the lowest unit cost of that row, 5 units are allocated to

(it is unnecessary to do more even when the capacity of silo 3 would allow it given that the demand for mill 1 is only 5 units). In doing so column 1 should be crossed out (we have marked it in yellow) and next comes the calculation of the new penalty costs as shown below:

Now the highest penalty cost is $9 ($11-$2), which is found in row 1. As a result the highest quantity possible is allocated to the variable

, at the same time row 1 and row 2 are satisfied. Column 2 is arbitrarily crossed out and the supply of row 1 is adjusted to zero.

Continuing on in the same manner, row 2 now has the highest penalty cost that corresponds to $11 ($20-$9), therefore

is allocated, so that column 3 is crossed out and there are 10 units left in row 2. Only column 4 is left and it has 15 positive supply units. By applying the Minimum Cell Cost Method to this column, we successively allocate

(it is recommended to confirm these results). Also note that there are other possible solutions that depend on how the ties are broken.

The value of the objective function associated with this initial feasible solution is Z=15(2)+0(11)+15(9)+10(20)+5(4)+5(18)=$475 which is similar to what was reached using the Minimum Cell Cost Method, nevertheless, the Vogel Approximation Method generally gives a better initial solution.